CrunchGear published the biggest product flops of the decade (according to them). Unsurprisingly, Windows Vista OS won the cup. I am actually feeling sorry for Vista and its development team after so many bashing they have had to suffer. So here is my message to those hard-working people. Go to hell, then you’ll be able to rest in peace.

The article has kinder words about Microsoft itself:

Microsoft has had a hard decade. They made billions, sure, but they haven’t led in mindshare since Windows NT. Geeks flocked to Linux in the early aughts and LAMP now rules the roost when it comes to web servers. Their mobile offerings are roundly and regularly panned and their incremental fixes to products have frustrated users.

They definitely had the worst decade in their entire history. There is a good news, though; at the end of 2019, the first decade of the 21st century would be regarded as one of the better era for them — compared to this decade which has just started. One of my favorite bloggers, Dan Kogai, shares similar sentiment (in Japanese) that Microsoft did suck great in the past year, if not ten. His idea is that it was about their marketing mindset, not necessarily about their products.

(Translated from the original website) Considering how they are marketing, not how they developed, Windows 7 (such as preparing the totally redundant 32bit version), I cannot say Microsoft really understands what fundamentally is wrong with them. It reminds me of the Japanese society in the 90s, the so-called “lost decade.” Worried people just stood by, watching the ongoing crisis pretending things would go back to “normal” soon. I hope Microsoft will not fall into the same trap as Japan did.

I think Microsoft has already accomplished its mission: to bring computers to every household. The problem is that they are still clinging to the same mission, trying to believe they are the challengers broadening the technological horizon for the masses. We are already enlightened, Microsoft. We do owe you a big deal, but we live in a different world. Why don’t you go look for something else?

Note: This banner is on the Official Windows Vista Home Page. Who said Microsoft doesn’t have a sense of humor? 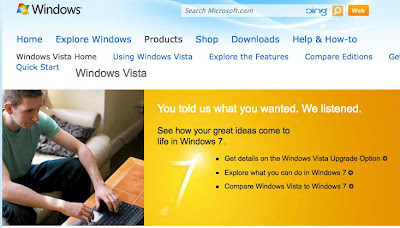