To conclude the aboriginal experience trilogy, I would like to introduce the wonderful Lanyang (蘭陽) aboriginal museum located in North-Eastern Taiwan. I wasn’t looking for something aboriginal or a museum—it was simply because the pyramid-like building was too tempting to just pass by.

I was initially disappointed that the pyramid contained yet another tourist attraction instead of a secret alien research facility, but the museum turned out to be the most well thought, thoroughly designed, deeply interactive, and purely entertaining one in years.

The glass panels aren’t just there for show: they take in lights and break the barrier between the visitors and the external world and/or exhibitions.

Once you set your foot in, the pyramid turns into a prism of natural light. The inside feels larger than what looks on the outside, thanks to a clever architecture utilizing our perceptual illusion caused by angled walls. 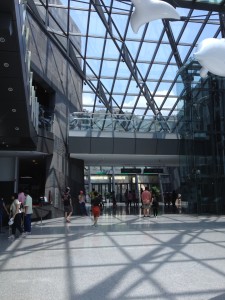 Transparency is embedded inside as well, creating the sensation that you are slipping into an aboriginal universe.

The open space allows visitors to freely explore the space. Despite the large number of people inside the building (those photos were taken on Monday, a “dead zone” for any business), everybody could secure a comfortable viewing spot due to many side streams of space created by smart object placement. 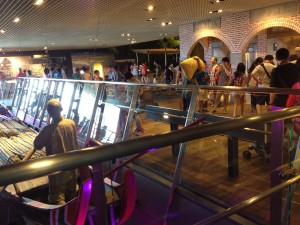 Exhibited objects and visitors migrate without borders, fusing the present and the past. 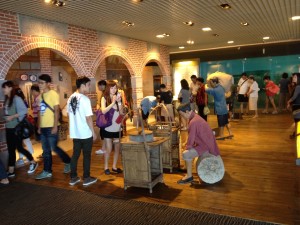 Free space does not mean chaos: The entire architectural design gently guides the visitors to naturally follow the stairs from the top to the bottom as they continue their “discoveries.” 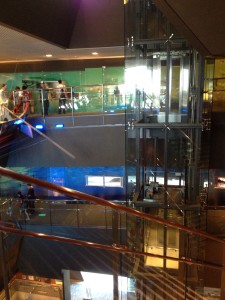 OK, that’s it for the mini-promotion. Now comes the other topic. I assume thousands of people visit the museum every day (I even bumped into a former colleague of mine), taking back renewed knowledge and maybe respect for the aboriginal history and culture. But how many of them, including myself, go back their home with a renewed desire for “real” connections with the aboriginal people?

The chances, I believe, should be lower than we would like to admit, and that is partly because the underlying concept of a museum is to “fix” a historical or natural moment. We might educate ourselves, but the knowledge base is separated from our daily life. We enjoy our time and fill our “duty,” get some rest and be ready for the new day in our concrete hills and asphalt fields.

The past was preserved inside the building, wrapped up in waxed dolls and was perfectly kept in order. What was missing was the present (and the future). How do we create opportunities to connect ourselves with the aboriginal people of modern era, their still vivid culture, their economical hardships, and more than anything, just being with them?

I don’t have a clear answer yet. But it is clear that building another museum isn’t the answer. A preservation might offer intellectual or even spiritual experience, but what we need is a physical, down-to-earth connection between each individual. And a raw encounter always incorporates genuine surprises, such as in my other motorcycle experiences.

Getting in touch with reality, even if it happens on the surface level, creates more questions than answers. The importance of a museum never gets diminished, but let’s keep it as an appetizer. The truly meaty part is like chef’s recommendation—you’ll never know.