Note: Originally this post was written before Palm went belly up.

Palm is the inventor of PDA (Personal Digital Assistant). I feel obliged to spell out PDA; it’s been that long since its entire market had disappeared. But their position in the history as one of the godfathers of smartphone–the other the Newton from Apple–is cemented thanks to the fact that so many current smartphones resemble the original Palm PDA by having the combination of large screen, Home key, and four shortcut keys.

From Wikipedia: doesn’t the button alignments of the original Palm Pilot resemble the current generation of Android phones? 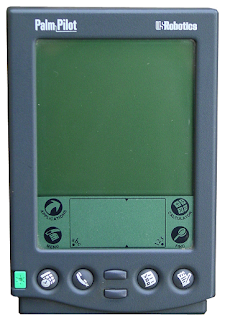 These days Palm is in trouble. By that I mean we do not hear about them much. Their supposedly messiah, Palm Pre, is not doing fantastically despite the initial fanfare. Just because they happen to be the proud owner of one of the longest living mobile OS in history, they cannot join the Android bandwagon either. Their application store carries a serious problem too: there is nothing to sell.

The first thing to do in a bad situation is try not to make things worse. Alas, someone inside Palm did not listen to the ageless wisdom, none other than its CEO (introduced by iA Tokyo’s Twitter feed):

Rubinstein said – during an on-stage interview with All Things D’s Kara Swisher at CES – that Palm really doesn’t “pay that much attention to Apple” and that he himself has never used an iPhone.

How come just a “slip of the tongue” from an executive be a potential stroke to an ailing company? Because it’s a lie. How come a former Apple executive in charge of building iPod hasn’t used an iPhone yet? How come a CEO hasn’t studied the biggest threat to the company’s earnings, or even survival?

I think a CEO in general has only two jobs: motivate others and make decisions. This interview squashed his reputation by violating both – he made poor decision by lashing out to the reporter waiting to blow every quote out of context, and he de-motivated employees and shareholders by saying he does not care much about the single biggest obstacle to the company’s future. Hiring a grudging executive from a competitor was probably the source of this trouble. By dissing Apple, Rubinstein is trying to shoot something back to his former employer – only that he is shooting his allies, and we now probably know why he had to leave Apple.