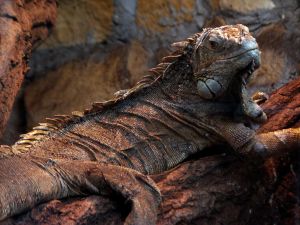 "Chameleon"—that’s how great character actors are described when they synchronize with their roles. Actors such as Meryl Streep and Philip Seymour Hoffman play roles varying as widely as a lonely Vietnam veteran's wife, flamboyant retired mother, and ruthless fashion magazine editor (Streep) or a wimpy closet gay, maverick CIA officer, and cold-blooded super villain (Hoffman). However different their characters can be, they are exceptionally convincing that they seem to be embodying rather than playing their roles, like a channeler possessed by the deceased.

But do they really “disappear” into their roles? If that’s the case, they must be unnoticeable, as real chameleons are. Real people living their daily lives usually do not attract much attention, even if their objective is to dominate the world. Well, if I seriously wanted to take over the world, I would stay as low-key as possible until the day arrives.

Yet the aforementioned actors are nothing but noticeable. Every second they are on the screen, our eyes are transfixed, especially when they have successfully “blended” themselves into their roles. Actors who exaggerate real profiles more likely end up creating stereotypes and remain unnoticed, like TV commercials. Think of the villain’s henchman, for example.

I think character actors don’t “disappear.” Instead, they highlight certain aspects of the people they are portraying, making them more noticeable than they really are, just like any actors do for any roles. Does that mean we can compare Truman Capote played by Philip Seymour Hoffman and the Terminator played by The Governator? Yes. Apparently there is a considerable difference between those two actors in terms of acting skills. But here, we’re talking about how believable a role is, and those two iconic roles are equally “real” for the audience. The difference lies in how close their roles are to people we actually know.

Here are iconic roles played by actors not known for their acting skills (you can also call them “stars”): an adventurous archaeologist, a whining rogue cop, a killer android sent from the future. I bet I would never see a real person, even in the media, who fits those profiles. But I certainly have seen, or will see, a wimpy nerd, a lunatic rock critic, or a neurotic playwright, all played by Philip Seymour Hoffman (I know I am sticky, but let’s admit: He is the best in the world at what he does).

Playing a non-existent profile is about claiming an unoccupied territory in our head; there is no memory to compete. I don’t know how to hold a double-barreled shotgun in one hand and drive a motorcycle with the other. Whoever implants the vision first occupies my knowledge base. On the other hand, playing an imaginary but real person is about replacing an existing profile: Joe the mechanic, Lin the dentist, and Mary the ex-wife. The actor might have never repaired a car, filled a cavity hole, or bitched endlessly about why forgetting to buy a carton of milk is a punishable crime. But if those actors are top-notch, they succeed in rewriting our database.

Both types of acting can be equally effective, but the complexity and difficulty will never be comparable. A great character actor does what all actors do—he just does it closer to our skin.

P.S. I consider The Terminator a masterpiece, but this line by the protagonist describing how stealthy the new type of android is, sounds ironic now.

The 600 series had rubber skin. We spotted them easy, but these are new. They look human… sweat, bad breath, everything. Very hard to spot.

Yes, looking back the Terminator was hard to spot…as hard as Schwartzenegger’s accent and constitution.