I have no business or personal association with jjot.com and its creator. I am going to promote jjot.com just because I find it very useful. No, it is not jott.com, another online note program. Neither it is jot.com (which curiously leads to google.com).

It is an online Post-it application. That's it. This is how you use it. 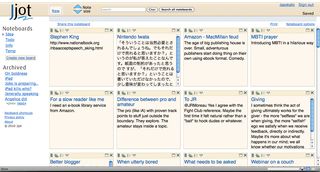 The easiest application to use

The best part of this application is that it is damn easy to use. No login process (it's still private though), no save dialog, no screen switch, no endless options. Just create a new note and write, then the application automatically saves the note for you. Everything is handled inside the main view. The sign-up doesn't even need the usual email verification. And of course it is loaded extremely fast.

It has just the right amount of features. Let's list them.

That's it. Sure there is no image-saving, voice recording, or even numbered-bullets. But does it matter? What we need is a Post-it, not an editor. Besides, unlike the paper version, sorting the posts is dirt simple: grab and drop. Also, there is no advertisement. Huge plus.

The original post-it company, 3M, has its own version of electronic post-it system. Unfortunately and surprisingly, it sucks. It has bloated features like photo-post option, is riddled with 3M advertisement, and worst of all, everybody needs to pay after the 30-day trial. Everything goes against the spirit of post-it notes: easy to use and dirt cheap.

Ideal for blogging idea board

Jjot.com can be used as a to-do task list but that's kind of limiting its potential. I find this tool very useful for assembling random ideas which can form the basis of a piece of writing, such as blog post.

Jjot interface does not include sub-folders. Everything is done on a flat plane, visible in a single interface. Sub-folders are must items when we need to separate information, but they actually works against fusing ideas. When we put items in separate folders, those ideas become fixed, or in other word, dead. The currently-invisible connections among ideas are lost – we can see the connections among items in the same folder, but not at all beyond the folder "walls."

Putting all ideas in a single plane keeps the potential connections among the seemingly random ideas. Considering that one of the most interesting aspects of any writing, including blogging, is to witness the creation of a new idea/insight/truth by fusing well-known, existing topics, having all ideas in a single place without getting them over-cluttered is an ideal environment. I must confess I didn't know I needed it before I started using Jjot.com.

I also like keeping the size of each note small – 140 characters or so before the scroll bar starts showing up. This way, I can list many notes on my screen and also force myself to tighten my writing as well as thinking. One positive effect of Twitter is that it trains us to be a concise writer due to its 140 characters limitation. We can do the same for post-it notes.

The same creator has another useful tool called Ninjawords.com. It is touted as an online dictionary "fast as a ninja." After using it I can confirm it is fast – maybe faster than Ninjas. Google translation is still my favorite because of its translate-as-you-type response and practicality (for example, no need to search for the root word when looking up the meaning of a Spanish verb), but Ninjawords comes up at a good second place.