Michelle Yeoh is advertising milk. Shiny photoshopping does not entirely hide the fact that she is wearing a hideous tee and housewife hairstyle, surrounded by a design devoid of subtlety in any sense. And what's that pointing-at-the-product-with-a-forced-smile? She is definitely onto something, but I am not sure if that's what she wants to admit in public. 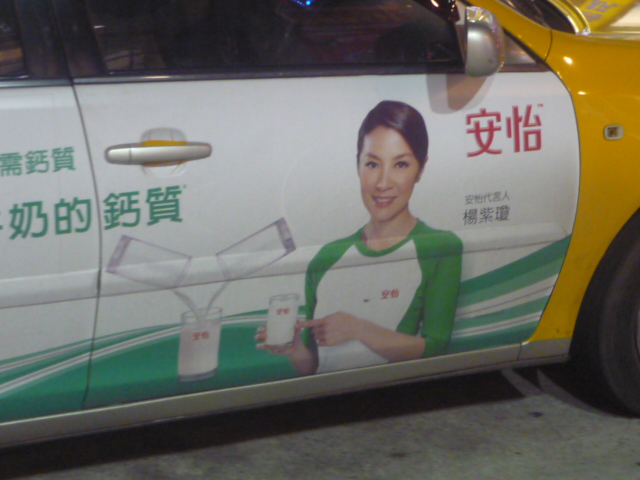 Here are theories on why this advertisement exists for real:

As always, Google search reveals the secret. Turns out the milk company exists for real, and they shot two versions of commercials: one for male, one for female.

The Male version (might also be the West): Michelle Yeoh as we know. She kicks-ass.

The Female version (might also be the East): The new face of Michelle Yeoh. She is a mom-like figure.

Probably the truth is that she wants to promote a "family-safe" version of herself, especially in Chinese-spoken market. In non-Chinese territories she will forever be remembered (rightfully) as the queen of martial arts. There is no way to avoid it because being typecast is the key to survive outside one's homeland, especially in Hollywood – countless actors have learned that lesson the hard way. But in South-East Asia, she can still be 楊紫瓊, in other words, herself. Also it doesn't hurt to learn acting that does not require kicking as she inches toward her 50s.

The milk advertisement suddenly started to look more tolerating. Even the clunky design might be a calculated move to make people feel more closer to her. Spend some wild international fame abroad, and quietly retire in home turf. Sounds like a great plan.