(Continued from the last post) As the WebProNews article says, one way to survive the blogging red ocean is to be authentic – to write things with *cough* value. Right, we know that, thanks. Is there other way? Turns out there is. It is to see the new writing media to one's advantage, not as a threat. Here is an example: Twitter novel. 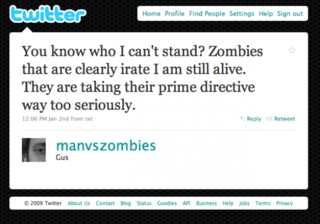 This attempt is intriguing because it not only combines texts and visuals but also makes the work of combination much easier than before. Aside from clever plot, good writing, and a modestly good-looking fake zombie images, this author does not need to prepare anything special. No software, drawing, printing, or -of course- publishing.

Comics used to be the only media that can crossover between texts and graphics and still stand as "writing". It is not just about entertainment for kids (or adults) – Japan publishes hundreds of non-fiction books written in manga-style each year. Graphics help digest the texts effectively and make us turn the pages.

Inspired by the Japanese "business" manga publishing industry, Daniel Pink has collaborated with Rob Ten Pas, a comic artist and wrote Johnny Bunko, the first English business book written as a comic, as far as I know. Or if we stick to the zombie world, we have a brilliantly-executed web comic series, The Zombie Hunters.

The is one, a huge, problem with this comic publishing model. It takes an insane amount of work and time to create a book. It also requires years of training in graphic art; definitely not the media for everybody.

From text/graphic melting pot to salad

The zombie tweet novel bypasses that dilemma. Even without the images, this model works brilliantly (it might be better than having amateur photos). Can we adjust to, or come up with, more such examples? A writing is a writing.