The photo below is a close-up of a life insurance found on the wall of a subway station. Something told me it is out of touch with reality because the very people that fit into the bracket posed by this ad, the riches and the haves, might likely not buy into it at all. 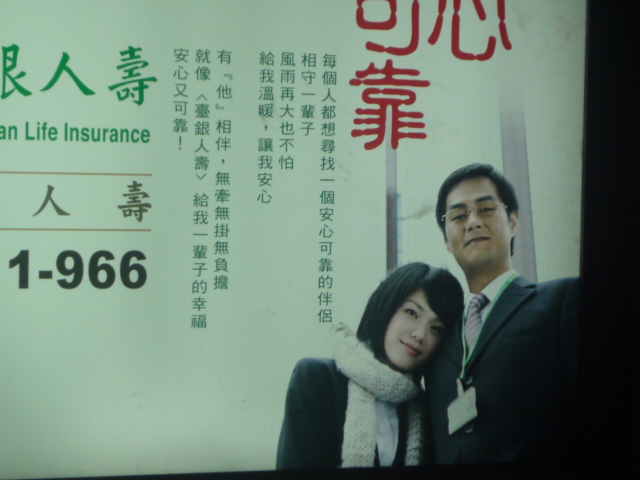 They buy insurance recommended by their inner circles, not from watching an advertisement posted on the walls of subway stations. They probably do not even know that this advertisement exists, because the riches are sort-of required to drive cars and not use public transportation for commuting, even if their offices are located in top-notch areas right behind major subway stations.

Insurance companies in general are very stingy, especially in this age with less young people (their income) and more old people (their expense). They know exactly where to spend the money, therefore this advertisement must be aimed right at the target demographics. Who? Think this way: who wants to be…

The answer: young guys, who are dreaming of career advancement, feeling threatened by peer girls (the lack of military service allows girls to have career advantage over boys in Taiwan), and having no other way but to use the subway. Most of all, due to years of spending time in cram schools and military service they do not have connections (yet) that recommends them truly useful insurance nor life experience to tell good deals from bad ones. They are likely more easily seduced by advertisement.

So after all, that ad might be working effectively, covering 99% of young or not-so-young male in Taipei.