I have done a consulting project for a media company, defero (small d, yes). I will chronicle how the project started and proceeded in today’s entry. Here is the outline.

Understanding what defero is about and its objectives

defero is a startup communications firm made up of individuals from “old media” (journalism, TV, publishing…) who are looking to use their skills in the 2.0 world to which they are digital immigrants. In fact, all they have at this moment is the company name. They do not have corporate identity, not even a website yet.

Defero needed a proposal for how they can launch their new company in mid-2010 and utilize a wide range of social media – from the obvious (a website) to wikis, podcasts, blogs – and perhaps even into less established platforms such as social networks.

What I needed to do was creating a convincing strategies for them to “win” the bloody 2.0 media wars by using the very same tools that drove their old industries to near-extinction.

Defining the platform for delivering the project

I was supposed to have a variety of choice for the method of delivery for the strategic planning, but in this case there was only one option in my head: to use a Web2.0 armored website. What is the point of encouraging people on the fence to jump on the new technology bandwagon without using the very “new technology” as the delivery medium?

Members of defero needed to learn the Web2.0 ropes from the scratch. Accessing the strategies in a modern website would be the beginning. Therefore, I decided to create a website (almost) dedicated to the defero project. My existing websites comprised of blogs and portfolios; not exactly suitable for convincing defero.

To create an effective website without wasting spending too much time in DreamWeaver, I picked up a free web-hosting framework, Google Sites. I had already created a website on that platform and it worked flawlessly (functionally, not necessary aesthetically). Its development process was also documented here.

So, what would the suggestions be? Simply teach them the tricks of using Web2.0 tools (Twitter, Youtube, Facebook…) in exchange for a hefty (in my imaginations) consultation fee? After all, isn’t that what everybody is doing these days? Teach the clients How, but never Why, because the consultants do not know any better.

That would have been acceptable, but never effective. I could do little more than making Wikipedia entries visually noisy. Something more than that, something that goes beyond Web 2.0 was necessary. This was also an issue that was bugging me whenever I thought about the whole Web 2.0 promise and its real effect on our economy and culture. Where should we go from there?

I remembered writing my opinions about the post-2.0 era and looked it up. A paragraph hooked my attention: I wrote this paragraph not only as my observation but also as a question to myself.

Free is the beginning and the end: What happened to the “how to make money” discussion? None of the social networks are charging money to users who only access to basic functionality. They charge money to users who want to do something extra; in other words, the “collect money from everybody (eventually)” mantra has been replaced by “collect money from heavy users (encourage everybody to become them, eventually).”

I decided to expand my suggestions for defero from the monetizing point. We all blindly accept that things will remain free for the foreseeable future. Is that so? We can do better than that (after all, we still need to pay for our living expenses). I myself particularly do not support paying scheme (my news subscription always occurs on Google News free of charge) but wanted to explore the possibilities.

Building the website nowadays starts from selecting online templates rather than holding a pencil and an open sketchpad. I know it is a cop-out, but for this project what mattered was effectiveness, not originality…

The Google Site had several business-like templates including the Professional Site Template which I eventually chose. It had a classic sidebar structure with various “widgets” for me to play with: testimonials, recent updates, calendar, search, RSS sindication, and download corner. 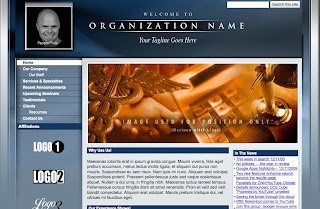 Visually, I stripped most of its color variations which was grabbing too much attention for my taste. I added my own banner and tweaked some of the fonts and page structure. 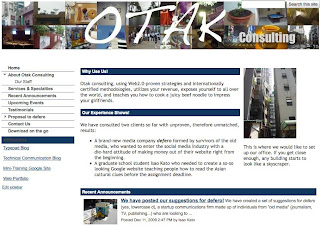 Now, the meaty part. I have scribbled down my thoughts into a text file and organized them: soon it became apparent that I was delivering not only as a presentation but also a story that starts from the old media era, goes through the current situation and extends into the future. Forcing the defero members to read the entire story at once is going to be a tough ordeal, and also it was so Web 1.0. Separating the proposal into two parts was the logical conclusion: the summary and the details.

I usually outlines my thought in a presentation file. Since it looked also fine as a summary, I decided to refine it and embed it into the website as a starting point. The clients would first view the presentation file to grasp the higher level concept, and then can go down into more details described elsewhere in the web.

Fortunately, Google Site works quite well with embedded versions of Google Docs presentations, complete with playback controls (a trick I learned when building my previous website). The summary presentation, shown below, was embedded in the introduction page of the proposal.

I built the rest of the details into the subpages below the introduction. Using real-life examples and articles from the web, I focused on summarizing the concept for easy understanding rather than showcasing how to use the tools by themselves.

The process was hugely rewarding because I have found what I was really thinking regarding the Web 2.0 monetizing topic during the drafting stage. I hope my learning process would also be communicated to the clients. Below are other findings from this project: