Mario, the mushroom-addicted jumpy-happy Italian plumber was created (or designed) out of technical limitations.

First of all, this is the final design (remember, it was the dot-graphics era of early 1980s). 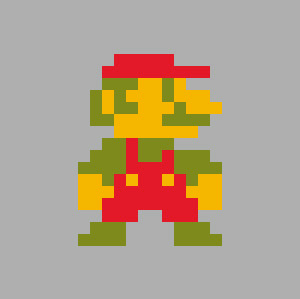 According to Miyamoto, the parts were designed as follows:

…Almost everything about Mario was created out of technical restrictions or gaming specifications. He was given the name Mario only because the result resembled Nintendo US Office's landlord Mario Segale, an Italian American so much. From Wikipedia:

During localization of the game for American audiences, Nintendo's warehouse landlord Mario Segale confronted Nintendo's Minoru Arakawa, demanding back rent. Following a heated argument in which the Nintendo employees eventually convinced Segale he would be paid, they opted to name the character in the game Mario after him.

Creating a long-lived device out of limited resource and existing technologies is what Nintendo does better than almost anyone in the world, and from Mario we can see it also applies to game characters.