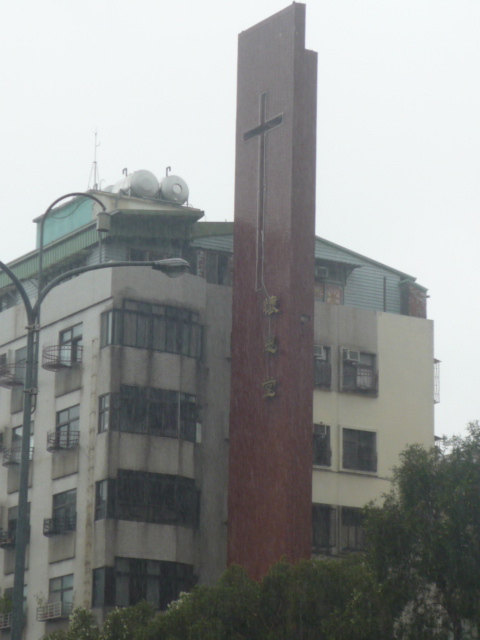 As far as I know, Taiwanese churches do not emphasize their most important symbol: the cross. Well, at least compared to their counterparts in the West and Korea. When I visited Seoul, all the churches in downtown illuminated their cross at the top of the ceiling at night. That's it, yes, but since churches in Seoul are as ubiquitous as 7-11s in Taipei, the whole downtown looked like a graveyard (or landmine) for vampires.

The above photo shows a nice example of proudly representing the identity of Christianity but in a "stealth" manner, satisfying both Christians and anti-Christians (the passive-aggressive group of conservative people whose primary method of objection is to ignore and then to influence the authority. All in silence). I ever noticed that huge cross until one day I got so bored and cold in a rainy day, I just had to look for an object around me to take a snapshot…there it was.

Because that cross does not illuminate during the night, it might attract us the way the monolith did in 2001: A Space Odessey.

P.S. Regarding Christianity, is there any religion on earth which uses a torture device as its symbol? For the record, I don't think worshiping an electric chair automatically gives us a healing effect (but how cool is it). I just think if someone hands me a piece of paper on the street urging us to reconsider how we live and bow to an iron maiden, I would start giving out the paper on my own, right away.