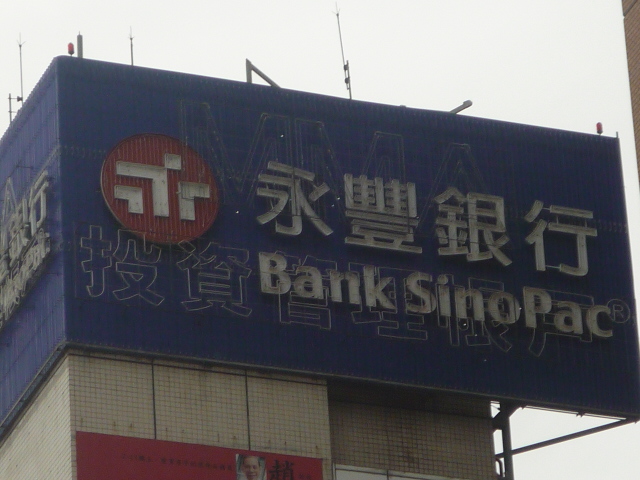 Nothing remains the same. People change, hard drive crushes, and billboards get overwritten. You cannot get away from your past, though. In the above billboard's case, they did their best to clean-install a new identity, but ended up creating a creepy 3d-like effects. Maybe they tried to embed two logos in one place. You know, the free gifts you find in a box of cereal…look at them from different angles…wow, Mickey (or Hello Kitty) waved his hand!

If I walk across the street and look up at the board again, I might be seeing Chinese characters in white with English ghosts in the background.

This billboard reminds me of the story I heard when I was visiting Israel. When they dig up an ancient monument (one of 1,000,000 in that area), they guess-timate its history by recovering the layers of old buildings. It is hard but not difficult, the guide told me, because the newcomers usually demolished the old buildings first and turned them into the pavement of the roads (who said modern humans waste much more than "conscious" ancient people?), then built new castles on top. This cycle occurred once in a couple hundred years, resulting in a nice Baumkuchen-like layer of bricks. I hope the same thing happen in that billboard too.

Israel is roughly as large as Taiwan. According to the Bible, Moses wandered around the wilderness for 40 years with millions of refugees behind. We tend to imagine they did something like crossing the Sahara desert, but probably everything occurred within the scale of…Taiwan? Here, a group of million people might occupy the area from coast to coast. Maybe the group of exodus just moved in circle, surrounding Moses.

I remember reading all the stories in the Bible as a child and bloating my imaginary Middle-Eastern landscape. Once I visited the holy places (Jerusalem, Nazareth, etc.) I saw almost all the historical events happened in the…neighborhood (sometimes even a walking distance). It is one of the best ways to realize that you have grown up.

I think I need to learn how to write with a consistent topic.