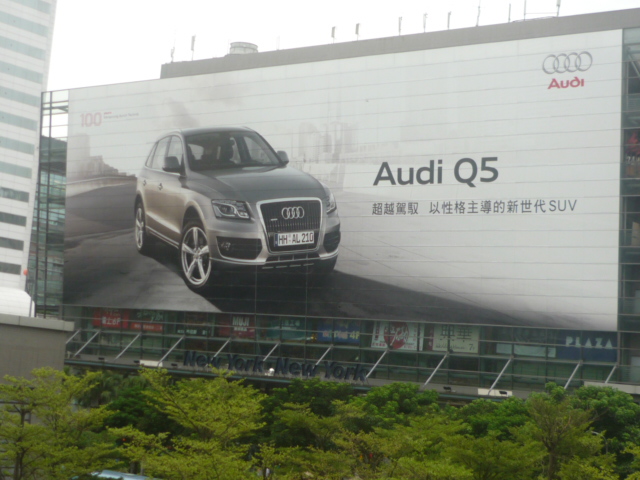 This shopping/restaurant complex across the Taipei 101 is called New York, New York – inspired by that song. Maybe not so: to be politically correct, the song is "New York, New York" and the building is "New York New York." Punctuation is an important factor as evidenced by the book (Giant Panda) Eats, Shoots, and Leaves.

In a totally unrelated context, Tokyo has a shopping complex called Times Square. The building is five times larger than its sibling in Taipei, the price of goods is three times as expensive, and it looks twice as cool. But they are probably blood brothers, surely Sister Buildings.

Unlike Times Square, New York New York decided to use all its available surface for advertisement (a single billboard). It is a stark contrast between traditional Taipei advertisement scheme, where all available space is sliced up and allocated to five or more small billboards with every imaginable color combination (primary colors make up the best ones). Sounds very untrue to design theory, but the result defies the theory by creating the most Blade-Runneresque, chaotic yet lovely night scenery in Asia alongside Hong Kong. We can say billboards are what makes the Taipei landscape unique, so precious.

Back to the huge one-piece billboard, now we have an SUV from Audi there. It is an amazing ad, not only because it is beautifully designed but also because it is not ashamed of presenting the product in a non-green, non-environmental, so-1990s way in this hybrid/EV dominated PR era. The car sits on a barren concrete road with manufacturing facilities on the horizon. No human, animal, or even plant is visible.

Audi is not known as a dumb company; they know what they are doing. So what we can learn from this ad is that Big/Heavy/Mileage-challenged/Look-at-me SUVs still sell, a lot, at least in Asia. I heard the profit margin of SUVs are particularly higher compared to smaller (greener) cars, and as a European company surely Audi should be shouting that they are the one of the most eco-friendly companies in the world. They might be making tons of money out of petroleum-wasters and pumping those cash into developing hybrid/electric vehicle.

Is it similar to tobacco companies selling cigarettes to develop nicotine pads?