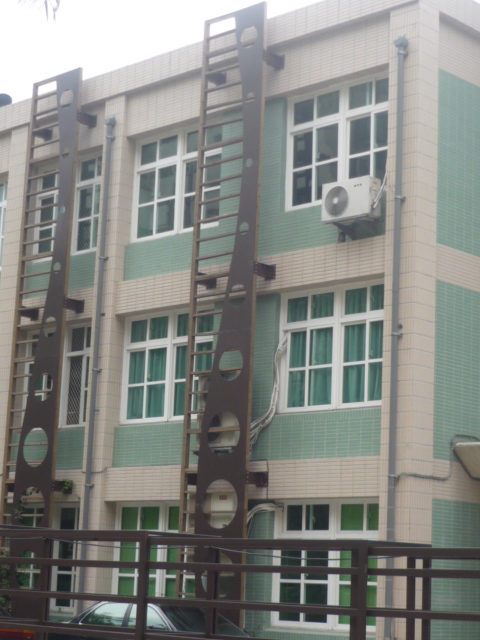 Like any other cities, Taipei has its own share of contradictions. Design is one of them. Design is everywhere in Taipei, at least in the bookstore. Any bookstore, from large chains to tiny magazine racks in our beloved 7-11s, fills its shelves with design-related magazines and books.

The actual cityscape tells us something else. It's not that the streets lack design or style. Taipei has one of the most unique urban landscape in the world – in a true Blade Runner style. Smoggy, overcrowded, filled with primary-colored advertisements shouting at you, nevertheless it is a city for the people who live there. We won't see the evidence of conscious efforts on 'landscape design' except for parks, roads, and office buildings. It is also a city which looks much better in the night than during the day.

The 'design conscious' cityscape in the glossy magazines and books all show alternate realities. They are clean, open, painted by carefully selected colors and textures. There is no ad, unless it is from the sponsor of the publication. These artificial landscape are built for people who STAY there for a short period of time. You don't see many trails of human activities like eating, drinking, or making love. Everything is designed on purpose, and the whole city looks much better during the day than in the night.

Collectively, the design movements show what 'conscious' people in Taipei want to do – build a modern, good-looking, high-standard city to catch up with other major cities in Asia. Which makes perfect sense, except for the last part – to make itself look like 'role models.' That means we see relatively few efforts on architects trying to recapture what makes Taipei unique and blend it with modern design. I understand that the grass always looks green on the other side, but how can we grow ourselves without knowing who we really are?

Or despite the onslaught of 'modern design', Taipei will grow its unique landscape which will be recognized and admired by the very 'models' in the magazines. The whole of Asia is, after all, result-oriented regions. Practicality wins in the end.

* The photo has nothing to do with the texts.