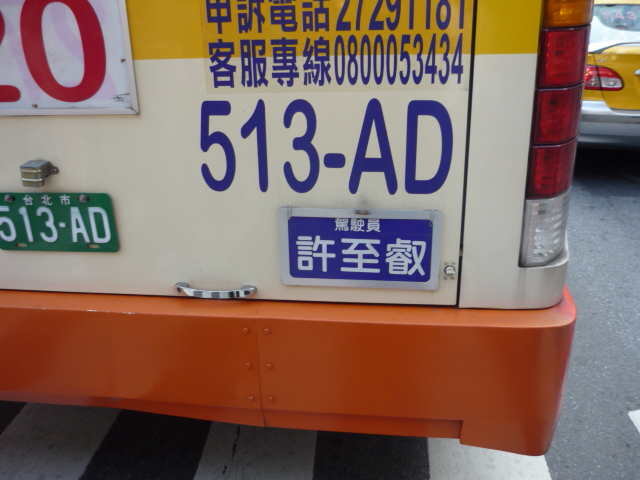 At the back of the buses in Taipei, we see the driver's name alongside the company nameplate. Officially, the main reason for this might be so citizens can call the local authority when 'something' happens. But it means something more important for the drivers themselves. They have names.

Not all of us notice the driver's name. Most of us do not remember it. But for the drivers it should be huge. Having a name leads to being remembered, which leads to leaving a footprint in this world. I haven't driven a bus but probably I am not off-target when I say it is not one of the more inspiring jobs. But having a name should make a difference – is this the reason why bus drivers in Taipei are so well-mannered, friendly, and responsible? Some even say 'Hello' and 'Thank you' when passengers get on or off the bus. Well, their driving manners are comparable to 15-year olds playing Gran Tourismo on Play Stations, but that might due to the…culture…

Another example of acknowledging the names of employees around us are Starbucks and IKEA. The latter case might not be so, since the designers are already well-known before they have started gigs in IKEA, but I suspect their creation of attractive household items at reasonable prices (Northern-European standard) gives job satisfaction to the designers whose names are not only mentioned, but also engraved in their works. In Starbucks they not only introduce themselves but also remembers our names. You are remembered by your name, with a free couch accompanied with a latte for two hours at only $4-5. Who can resist?

There is also the example of TGI Friday, where employees introduce themselves and offer jacked-up services (and prices). The conclusion? Nobody wants to remain nameless, so give them their identities and show them to everybody – good for business, customers, and employees. Isn't this the natural right for all of us? When did being anonymous become the de-facto standard for service workers?