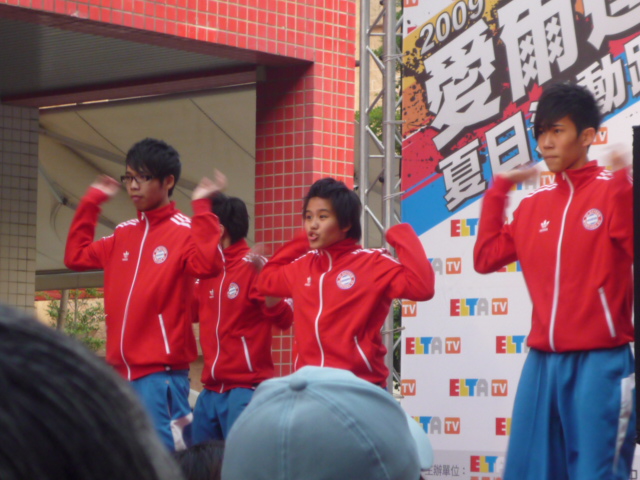 At Taipei 101 shopping mall, four dancers share their best moves in front of a curious audience. I think the mall is the best place to practice curing our stage phobia – there is always someone to watch you, most of them with idle time, there as customers but undemanding as an audience. The audience understands they get what they pay for ($0). The width of the mall strip naturally limits the size of the crowd to a comfortable under-100 zone. There are just enough amount of people not to make you feel lonely + no demanding customers so you have nothing to lose + no large audience so you won't feel any pressure.

Just a caution note to the left guy: do not wear (color-less) glasses, unless you are Elton John and you wear a pink frame peppered by fake diamonds. Also you need to sing awesome songs so awesome the audience can totally not focus on the costume you are wearing.

Side note: In the '70s and '80s, the Japanese media tried their best not to spotlight Elton John's sexual identity, because Your Song was the de-facto date song and more importantly, also a children's song (at least in my elementary school). It worked. If we pulled a poll back then, a majority of Japanese would not know he loves men (or dismiss the news as mere noise – who wants their fantasy to be ruined?). There are no statistics to support this claim, but in the 90s they made a film based on that famous song as a love story between a man and a woman.

Today, the time has changed I hope.