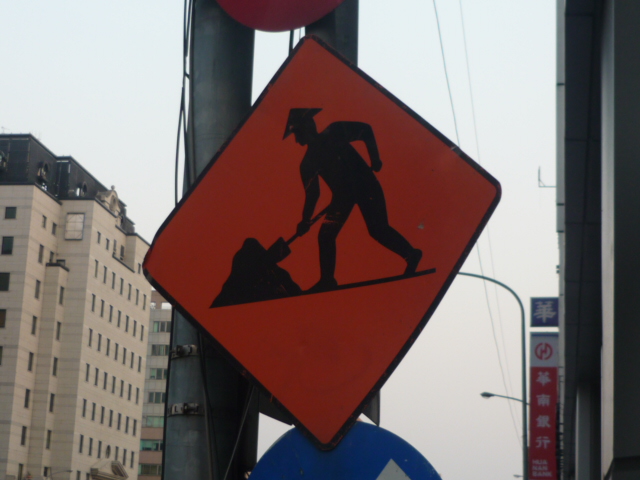 A lovely sign depicting a good-old manual worker with his hat. That triangle hat is the point. If this sign were displayed in other (particularly in the Western) countries…it would have been taken as racism, an attack against China, ignorance, on and on. But this is in Taiwan, and the sign was most likely designed by locals, no doubt authorized by locals. We can guesstimate the triangle hat is no longer a symbol, at least locally, which recalls the caricatured Chinese worker/businessman/opium den owner with the tiny mustache.

Maybe the hat image was overused beyond the original context because it was so convenient for identifying people from China in drawings, photos, or movies. I also think about the turban from India – I used to believe all people in India wore turban until only several years ago. As adults we all know these are inaccurate, biased conceptions but it is still hard to shake off something that was ingrained when we were kids.

Such a tiny part in the whole design has enough power to completely change the perspective and impression – is it something called the power of design? Also, is this why building a shape/face recognition program is so challenging? We have a huge amount of memory buried somewhere inside our body. The brain, amazingly, picks up the relevant parts in nanoseconds and reconstructs old images, sounds, smells that let us recall figures associated with that symbol… As a search engine maybe we are slower than Google, but definitely more accurate (even selectively accurate). As a compiling program no application ever ade is close to our brain's reconstruction capability.