Today I received a piece of advertisement. 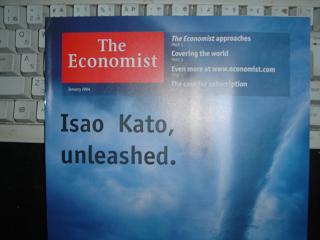 OK, this is one of the reasons they requested me to put my address into the subscription form for www.economist.com. But that should be a minor one. I want to believe there is a bigger conspiracy beyond my reach (but within my imagination). Microsoft tries to protect their source code because there is a hidden code somewhere that sends all your information to the Big Brother constantly through the net. Japanese government is already able to detect a person’s identity regardless of where he or she is and be able to threaten us by hinting naughty boys and girls would not receive the pension money. That means you’ll get punished no matter whatsoever.

And I cannot put that piece of paper into the trash can. It has my name on it. Unleashed. Name has a strong power. I had a chance to visit a showroom recently, and it had a board saying “Welcome” with my name scribbled. I did have an appointment but it made me relaxed enormously, in a second. Name is strong, it catches me off the guard, and yet it can be abused so easily.

I watched a movie called Crucible four or five years ago. I don’t remember much about it but one line from the main character played by Daniel-Day Lewis. He shouts this just before he is sentenced that he can take his name away and live as nobody or being hanged by the sin he committed.

Because it is my name! Because I cannot have another in my life! Because I lie and sign myself to lies! Because I am not worth the dust on the feet of them that hang! How may I live without my name? I have given you my soul; leave me my name!

He is hanged. I didn’t understand this a bit then, now I am getting to understand it bit by bit (but will never fight that hard).

By the way, what would my psuedo name be like?
Zhang Yifeng – 长一风 – a dust of wind : my Chinese name, which was given by one of the part-time teachers when I studied for about 10 days in Beijing. I like this. Sounds like a rootless lifestyle and it justifies my inability to engage and to commit… Too comic? We already have Jackie Chan who is 成龍, which literally means “to become a dragon” (well, my friend from Shanghai told me it’s too clunky a name but..).

Panasonic Kato – I will use this when introducing myself to one of the prospect customers in China. I am sure to be remembered. Sony is too snobby(Aiwa Kato might be OK). You can use anything for your first name as long as it’s a noun. I know there are Steel Chan (strong as a steel), Lemon Lee(fresh but watch out, I’m not that sweet…) and, and, Peter Pan (an everlasting boy, yes!). I didn’t have the gut to look into the picture of the last guy.
What was I writing about?