I first encountered this online game called Doom when I was still in college – 10 years ago. Then, Windows was version 2.1 (means it was totally useless and was always mocked by Mac or Unix or even NeXT users in the university) and the internet was in its infancy (means we could download almost anything from disk swapping utility to very, very abnormal pictures). We got one computer geek in our laboratory and our $10,000 machine was instantly turned in to an extremelly expensive 24/7 game console.
We cannot explain our love toward Doom by just being “fascinated” – playing Doom (and much better Doom II) became one of the reason we went to the lab every day. We played it day and night, connected to almost anywhere in the world and enjoyed deathmatch as well as enjoying the core of this game- kill, kill, kill. 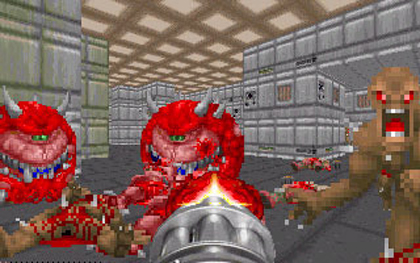 (From : www.dorkclub.com/art/ top25/doom.jpg)
Now ten years after I spend almost 10 minutes every day in avarage(any progress?), playing this on my Windows2000 desktop(at least I got one). It is my everyday ritual to easy my tension off and get whatever anger I have in my mind. Very easy, the imps or demons coming along the way looks like one of my fussy customers or dumb colleagues. I nuke them in two seconds.
Sorry, this weird story goes on. I have downloaded 500+ levels from the ftp site 6 years ago and since then playing them one by one – one whole cycle takes about 2 years so now I am in the third round now. It is finally getting somewhat repetitive and a bit boring so it might be time to switch —— to a new level! (not to a new game or even to a new habit)
There were some other bloody, gory, and brutal games such as Duke Nukem and Hexen but none of them even wet my appetite(I must admit I have never tried a new game for this 5 years). It’s not about the complexity of each level or the number of weapons you can enjoy – it is how realistic these bastard aliens move, struggle, and die. The other games fall in one of two traps. Either their animation is too primitive and unrealistic(like watching one of those Ray Harryhausen film : I love his fims, by the way), or there are too many elements inside the screen, too cluttered.
There is one and only reason to play these games: terminate the bastards. There are some background stories to justify my activity – such as I am there to protect the earth from some evil aliens which came from another dimension. We need this -in order to avoid lawsuits, even Steven Segal needs an excuse for violence(in his case, “bullying” might be appropriate) today. But the fact is these excuses make us more violent than it should have been, since we are more safe and free to do whatever our dark intention tells us to do.
Soon we might have a totally new version of Doom : some snapshots are updated here. Looks even more brutal(nice), but I won’t be expected too much. We have already experienced enough of this too-much-expectation in The Phantom Menace.
By the way, this creature? reminds me of the “human head spider” in the classic movie The Thing(point the arrow on the image). I don’t think they stole the design – rather it must be a tribute to that great, great film of the 1980’s.