My friend and colleague in Israel, Moshe’s family with his newborn baby.
Incredibly, he is still being associated with this contribution to the society. 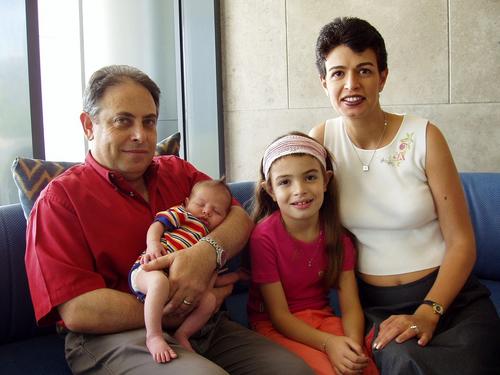 His new son’s name – Seguev means grandeur, greatness, sublime, and august according to Moshe. He’ll surely be pround of his name and I like it because it is not too difficult to pronounce and sounds nice.
There is his daughter , Shaqed as well whose name means ” Almond, a biblical tree that is one of the attributes of the holy land”.
Up until now I have never thought of having kids seriously. Marriage will be a matter of time (I hope ), but having and raising a family seems to be a daunting task and I never got enough confidence to be open about this issue. Now I understand a bit why I have been so intimidated, it is because I had been focusing on only one side of the issue, which is called duty. Why not having pleasure out of it ?
Well, the thing is the first time I saw this picture I got very, very jealous, although it might not be fair to state it. Everything is in perfect harmony. Let’s keep having kids as an option, and when I need a bit of encouragement, this picture might help me moving forward.
Moshe loves Japanese movies (Kurosawa and Miyazaki). His family enjoyed watching Spirited Away. I often talk negative stories about Japan, the ailing economy, aging society, poor education… but when I hear this kind of story, it makes me feel proud of being and born in Japan. Whether negative or positive, I cannot refrain from thinking and reacting the issues and people in Japan – no matter I study foreign languages (English and Mandarin) and being facsinated by their efficiency, work in a foreign company, or watch hollywood movies, I will always go back to the same place. But that doesn’t mean I will be a vocal nationalist – quite the opposite, since I guess learning foreign cultures (even it came from mere fashion) made my standing point more clear – and I firmly believe the more people learn different culture, the more they can understand and love their own culture. At least in the long end 😉